The stars stepped out for this year’s MusiCares Person of the Year gala, honoring Aerosmith. Take a look at who walked the carpet and who performed during the show.

David Alan Grier stopped by The Late Show on Friday night to chop it up with Stephen Colbert about his starring role in The Soldier’s Play on Broadway.

Turns out, Grier was actually in the original version of the play back in 1981, and during that time, he shared a dressing room with two soon-to-be legends: Denzel Washington and Samuel L. Jackson. He tells some absolutely hilarious stories about the latter, confirming that Jackson has always been exactly the same person, even before he made it big.

Check out the interview down below to hear David Alan Grier’s behind-the-scenes stories.

Aerosmith accepted the 2020 MusiCares Person of the Year award but one member awkwardly left the stage before he could join them in a performance.

Federal prosecutors are trying to figure out how the National Enquirer got their hands on Jeff Bezos’ nudes–and they may have already cracked the case.

According to reports from the Wall Street Journal, investigators have encountered evidence that Bezos’ girlfriend, Lauren Sanchez, sent the explicit photos to her brother, and he’s the one who sold them to the tabloid for a whopping six figures. Text messages sent from her phone to Michael Sanchez’s phone on both May 10, 2018 and July 3, 2018 reportedly contained a shirtless photo from Bezos along with a “flirtatious message,” that was quoted in the Enquirer‘s 2019 story revealing Jeff Bezos’ affair.

While this evidence doesn’t fare well for Lauren, it’s still unclear if she knew her brother intended on selling the photos and messages. How the Enquirer obtained the other material at the center of its story is also unknown.

The Amazon CEO published a blog post claiming that the tabloid was threatening to release intimate pictures of him and his then-mistress Lauren in February of 2019. “I was made an offer I couldn’t refuse,” Bezos wrote. “Rather than capitulate to extortion and blackmail, I’ve decided to publish exactly what they sent me, despite the personal cost and embarrassment they threaten.”

About a month after Bezos’ post, the Wall Street Journal reported Michael sold the explicit photos and texts to the Enquirer for $200,000. In a statement sent to WSJ, AMI confirmed Sanchez provided all the photos and texts to its writers in September 2018, also insisting Saudi Arabia was not involved.

This comes after a newly released forensic report determined it was likely that Bezos’ iPhone had been hacked after he received a malicious video via WhatsApp. The footage was reportedly sent from a phone number used by the Saudi ruler, but the Kingdom denied any involvement in the situation.

Are Lori Harvey And Future Engaged?

Lori Harvey has started her own engagement rumors after showing off her occupied ring finger on Instagram. The step-daughter to Steve Harvey showed off a diamond dripped double banded ring on her engagement finger with the words “wife life”.

Lori propped her hand next to Taina Williams’ as the ladies dined and sported similar jewelry. Do YOU think this means she’s ready to wed Future Hendrix?

There’s no question that Future is smitten over his Lori Harvey romance. He’s been showcasing their lovefest a little harder than he has with any other woman in the past. So far, it’s only been a few short weeks since they’ve been publicly claiming the romance but maybe this is a forever thing? Who knows in Hollyweird!

Do YOU think Lori and Future will jump the codeine broom together?

Porsha Over Dennis And His Infidelity?

It looks like #RHOA star Porsha Williams might be ready to blow the whistle on her relationship and spill all of her own tea.

The reality actress left hints in her Instagram story that she was “done” and could be “about to tell it all”. Fans are assuming she’s referring to her up and down relationship with Dennis McKinley.

Swipe to see the cryptic posts.

Recently, Dennis was spotted in Atlanta at 4 a.m. dining with 4 mystery women. “He came in with four beautiful women. Porsha was not with him. Dennis was the only man in the group and all of the women were flirting with him,” a source told RadarOnline.com

Porsha and Dennis first called off their engagement in June 2019 after she learned he had been unfaithful while she was pregnant with their daughter which left her devastated, but she chose to forgive and move forward.

Do YOU think Porsha and Dennis have called it quits again with these cryptic messages? 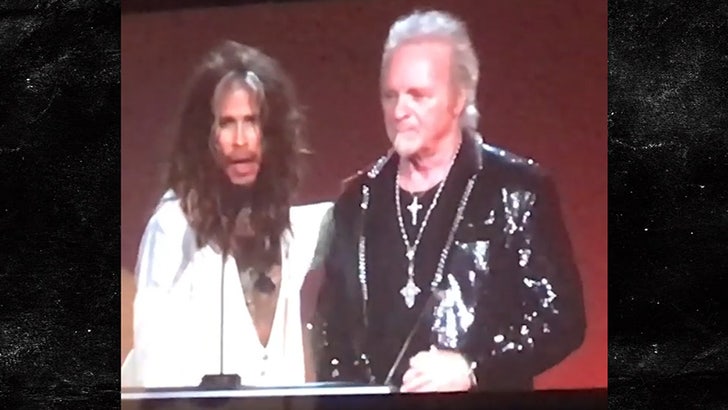 Aerosmith got its award Friday night, and the acceptance speech was, well, awkward, because the band’s wayward drummer was right there on stage with the boys, even though he wasn’t allowed to play with them. 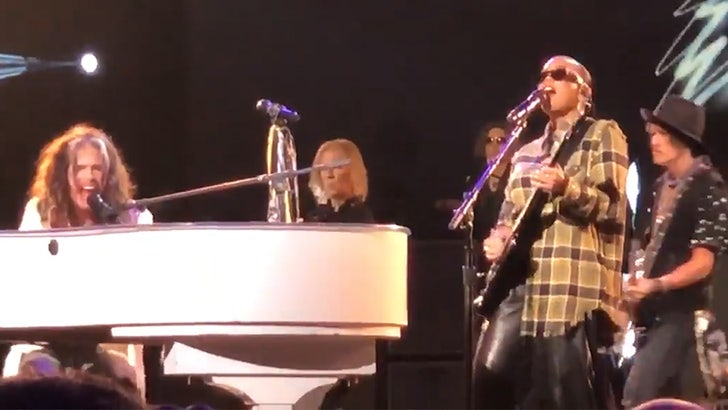 If you’ve been following our stories this week, you know Joey had temporarily taken a leave of absence from the group for personal reasons. When he said he was ready to come back, his bandmates made him audition, and they say he lacked energy so he couldn’t play the gig.

Joey went to court to get an order forcing the band to let him play, but the judge shot him down. 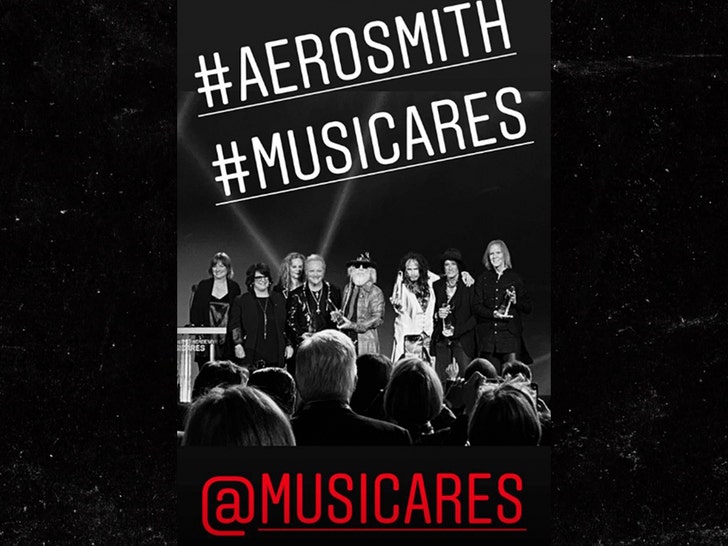 Aerosmith, which is celebrating its 50th year, performed “Big Ten Inch,” “Dream On” and “Sweet Emotion” … and Joey was nowhere to be seen because he left the stage.

The group’s entertainment lawyer, Dina LaPolt, put it best when she introduced the band … “They are brothers. They refer to each other as brothers and they even fight like brothers.” 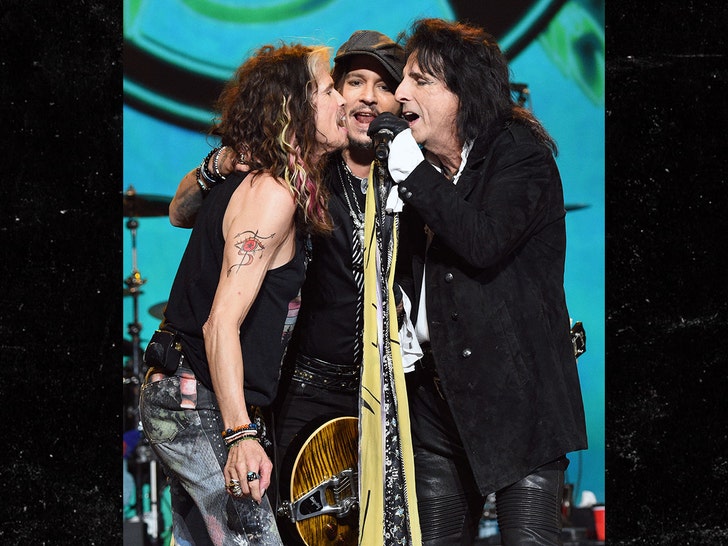 Alice Cooper and Johnny Depp also rocked the event … they play with Joe Perry in the rock group Hollywood Vampires.

And, there were other performances … Foo Fighters, the Jonas Brothers, Jessie J, Sammy Hagar, Kesha, John Legend, Cheap Trick and Gavin DeGraw. Legend got a standing O for his rendition of “I Don’t Want to Miss a Thing.” While Kesha gave an emotional performance of “Janie’s Got a Gun.”

The event raised $6 million for health services to members of the music industry.

Zola Premiere At Sundance Gets Rave Reviews From Critics And Attendees

Zola is one of the greatest things to ever happen to the Godforsaken internet. Yesterday, the gold standard of Twitter threads was unveiled to a rapturous crowd at the Sundance Film Festival in Park City, Utah.

#Zola premiered at #Sundance today & it couldnt have gone any better. The response filled my spirit with so much joy…I am full of gratitude & inspiration thanks to this group of ridiculously talented people. I am forever grateful & proud of the perfection that is this film❤️ pic.twitter.com/XD4hHjBOKb

The excitement was real.

At the #Zola premiere now and pretty much all of Hollywood is up in here. I’ve been waiting for this film for four years. I’m ready! #Sundance2020

The film stars Taylour Pagie as the titular lead character, Riley Keough as “this b!t¢h right here”, Stefani, Colman Domingo as the pimp, and Nicholas Braun. Director Janicza Bravo wrote the screenplay alongside Jeremy O. Harris who wrote the theater piece, “Slave Play”. The film is produced fittingly by A24, a unit that is responsible for some of the most creative and captivating cinema in recent times including Uncut Gems, Waves, The Last Black Man in San Francisco, and Midsommar.

Hysterical, authentic & the best of what the internet inspire. #Sundance2020

ZOLA is on an UNCUT GEMS level of insanity as a story and stressful experience. It’s hilarious, stylish, creative, and everything you expect from a Twitter thread come to life. A true rollercoaster experience that NEEDS to be in conversation for the whole year. #Sundance2020

Just saw the “Zola” film at the @sundancefest and it was absolutely fabulous. From beginning to end I was entertained.

Super excited to write about it in the coming days. 😁 pic.twitter.com/tFfJbm22Uj

We’re geeked to see such boisterous reactions while we are simultaneously jealous as a muhf***a that we haven’t seen it yet!

Taylor Swift won’t hit the red carpet or be on stage to accept any Grammys (if she wins) Sunday.

Tanya Tucker co-wrote “Bring My Flowers Now” with Brandi Carlile on her last day of recording a new album.

Demi Lovato is taking the stage at the Grammys in her first performance since her hospitalization in 2018. She opens up about the song she’ll sing.